I just had to share a couple more shots of the two girls who made it all possible in case you the reader don't make it to the gallery. These were some sunflowers we grew for a cover crop, selling a few at market. This is Melissa  a strong and dependable worker who grew so many of the vegetables that fed people this season. 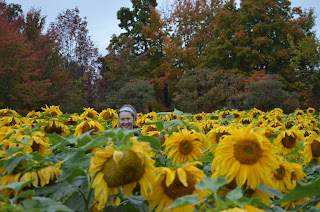 Here is Kelly, finally out from behind the camera for her own shot in the sunnies.
Check out a few more 2012 shots down towards the bottom of the page in the gallery . 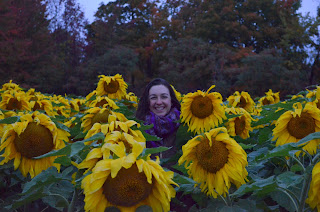 One final shot from the excellence of summer. Tomatoes,
sunset. 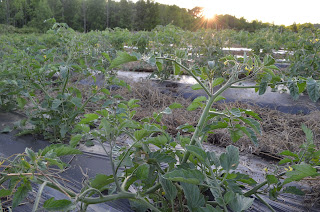 Posted by Solstice Hill Farm at 5:48 PM No comments:

Clemens Here,
Apologies for not writing more but farming season does not lend itself well to blogging. I will be adding some of the seasons best photos courtesy of our resident photographer, Kelly. Please, check them out in gallery.  I will also try to add thoughts and stories from the season in the coming months of down time.
The season is wrapping up, leaves on the ground, squash in bins and onions tucked in boxes. The tomatoes were just torn up today and the irrigation drip line rolled  for use next year. Time has opened its brief window for assessment of the year and planning for the next.
I would have to say this was the most difficult year yet. The lack of rain for six weeks tapped every resource, both physical and monetary. The irrigation system was upgraded to cover the entire farm, four acres now. That of course meant laying the lines for this endeavor and keeping pumps running late into the night to accomplish getting water to the four zones the system was separated into. In dry weather like that, by the time the last zone had been watered the first was ready to be done again. It was, "make or break" in that plants grew great with water and died a under a scorching sun without.
It was a great season. The CSA was larger and better fed then ever. The members gave positive feed back which was always encouraging. The market stands were larger and better stocked through the entire season. All in all the hard work of surviving the drought payed strong dividends in both satisfied CSA members and success at market.
I could not have asked for a better crew to do all this with. Kelly and Melisa were tough from first hour to  friday 12th hour. The fun, laughter and hard work we shared will linger with me for a lifetime. I hope to have them back some season as they have both expressed interest in continuing in agriculture. It seems these young ladies have some of their own adventures to pursue but they know the door is always open to them at Solstice Hill Farm.
Special thanks to all our CSA members without whom non of this would have gotten off ( in ) the ground in the spring. Much appreciation needs to be expressed to our dedicated customers at the Saturday Delmar and Gloversville farmers markets. It makes it all worthwhile when folks not only come each week, rain or shine, but say when they come that we have the best stuff around. We work hard to produce the freshest, best tasting, most nutritiouse veggies possible and we're glad it shows.
Posted by Solstice Hill Farm at 4:52 PM No comments: