Hi, Kimberly here. Well, well, well...three holes in the ground (bah dumm dum! that's one of my favorite bad jokes). But seriously, well, well, well, that was quite a one-two punch nature gave us early this year!! Though I am grateful that it waited until after market closed yesterday to begin again, and that we didn't get the two-feet of snow that areas of Connecticut received.
﻿﻿﻿
﻿﻿﻿
﻿﻿


We were able to harvest some carrots on Friday to bring to market, the reemay we put over them on Thursday kept the greens looking suprisingly lovely, and since they are underground even if the greens take a hit we should still have some for our last CSA distribution on Tuesday. Possibly even beets, for the same reason. What we had in storage in the garage (winter squash and onions) went into the house on Friday afternoon to be shielded from the repeated cold nights.

Some broccoli was harvested (a bit on the small side in an effort to get something out of the bed in case it was killed by the weather), and we noticed that the cabbage worms had infested it. The bright side of that is it's proof that we grow without pesticides, but I know most people don't consider them good eats so I'll also pass along that I hear that the best way to get rid of them is to boil the broccoli in salted water, they should float right to the top. Personally I pluck them off while I'm chopping it up, and bring them outside for the birds to eat (I don't like to boil food generally since nutrients leach away; I steam instead). A funny story from a couple of years ago, when I was helping run a large CSA distribution in Brooklyn: one young woman asked the week after we got broccoli about the small bugs on it. I mentioned the cabbage worms, and she said, no, no, much smaller than that. She added that they were also bright green and didn't move much and washed off easily, so she didn't mind them but was wondering what they were. I wasn't sure, I hadn't seen any small green bugs, so I promised to ask the farmer. About 30 minutes later, though, still at distribution but having that exchange run through my head, I realized she must have been referring to the cabbage worm poop. 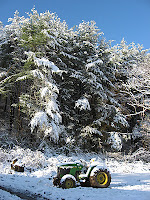 Anyway, Clemens isn't sure what will survive the next few days, and so Solstice Hill Farm may not make it to the indoor Delmar market this year. On a personal note, my last day is scheduled to be this Tuesday, the last CSA distribution day, and so I will be heading back home to NYC for the winter this Wednesday. It has been a great pleasure getting to know all the CSA members, and all the regular customers at the Delmar farmers market, and on behalf of everyone at Solstice Hill Farm I want to thank all of you for supporting the farm this year, it wouldn't have been a success without you!!

P.S. to the CSA members: We would greatly appreciate your feedback, so please do remember to bring your completed survey with you on Tuesday.
Posted by Solstice Hill Farm at 3:12 PM