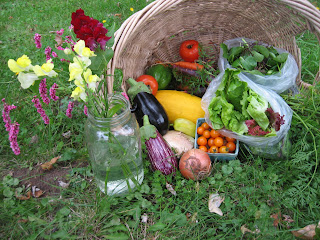 Hi, Kimberly here. We hope you enjoyed the inclusion of some flowers in this week's share; the droopy pink sprays are "Kiss Me Over the Garden Gate" which apparently was first grown in the U.S. by Thomas Jefferson. This old-timey flower was new to me this year, and on a personal note digging up and repotting the self-seeded plants in the back part of the greenhouse was one of the first things I did here at Solstice Hill Farm. They were re-planted in the greenhouse and have really taken off, and they're quite tall, though perhaps not the 12-ft tall (!) that they can grow to be. Also from the greenhouse in your share was the eggplant. 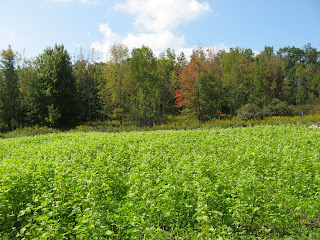 Autumn has definitely arrived around the field. The plants are not growing as quickly as during the long, warm days of the summer (and this includes the weeds, yay!). As the temperature drops we've begun using oats as cover crop instead of buckwheat (the buckwheat in the picture above was mowed down shortly after it was taken this past week). The tomatoes in the field are beginning to wind down (though are surprisingly prolific considering how unhappy the leaves and vines look), and the tomatoes in the greenhouse have begun ripening. There's still plenty going on in the fields to keep us busy and harvesting, though, including a new snap pea planting that we're hoping will be ready before the first real frost. 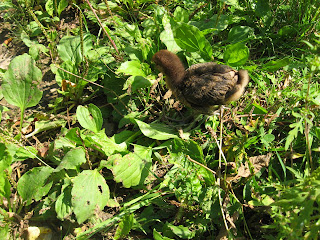 The chick has gotten much larger, and likes to peck around in the front lawn for bugs and seeds, as long as there is supervision (no visits from the cats or big chickens are welcome). I was noticing how time has passed here, and I thought I'd pass along the observation that we have only 6 more CSA distributions this year (the last one is November 1st) so we're almost 3/4ths of the way through. I feel a sense of satisfaction for a job well done so far, but also sad about beginning to face the end of the season. I will definitely miss our Tuesday afternoons together!
Posted by Solstice Hill Farm at 12:18 AM