Hi, Kimberly here. We were happy to see everyone at distribution, and happier still that we were able to bring you your shares this week amid all the havoc that was wreaked in Schoharie County by Irene! Our luck being on a hill rather in the valley area during this unprecedented storm makes us grateful, and we share the sorrow of the CSA members and their friends and family who have lost much! 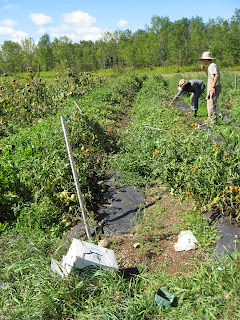 As Irene approached, up here at Solstice Hill Farm we prepared by harvesting all the tomatoes that were just about to come ready, not just the ripe ones, in hopes that that would keep us in tomatoes for our CSA and markets (we hope you have been enjoying them so far) in case we lost the tomato plants to the storm. We would have harvested more (melons, lettuce, etc) if we had cooling facilities of any size, but without it there was no point, and we would just have to wait to see what Mother Nature brought. The greenhouse was also closed up and battened down as tightly as we could, as last year a storm of a smaller size ripped up the plastic and damaged some of the structural hoops. Our tomatoes were blown down, but not killed and we spent all Monday morning re-staking them up. The leaves were also stripped off the winter squash, and the summer squash (which was struggling already) pretty much died. We find ourselves in the awkward position of harvesting both melons and winter squash at the same time (both need to get out of the fields before they rot...we were able to repurpose an old refrigerator to store some of the melons), after this odd summer. We also had some minor flooding in the fields, but it was worse during the Spring rains. 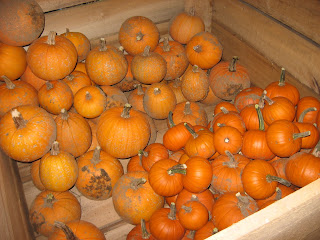 Having been spared the fate of farms like Schoharie Valley Farms and Barber's, we started getting requests for veggies from Corbin Hill Road Farm which runs a set of CSAs in the Bronx and Manhattan. They had contracted with a number of Schoharie County farms to supplement what they would grow themselves, and with one of their major suppliers flooded beyond repair for the season they were looking to us to fill in a gap. We wish we could do more to help them, but we're not in a place where we can ramp up. We were able to get them 130 onions, 125 chard bunches and 50 kale bunches this week to help feed some lower-income New York City residents. We're also keen to continue to feed the greater Capital region, too, at the two markets we sell at, and of course our own CSA members! 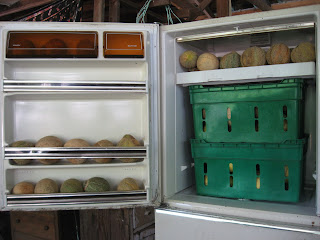 In other news, most of the first batch of storage onions successfully dried, and we put out a second batch today. Last Saturday on the way back from market one of our farm vehicles lost the tread on a back tire; fortunately we were able to be towed and have the tire replaced, though it delayed our return to the farm and Clemens ended up battening down the greenhouse himself. Today one of our chickens was killed, it was found in the coop with its neck broken, it looked like some animal (a weasel?) tried to pull it through a small gap to get it outside. The deer have gotten into the beans and decimated the current planting, so the new rows which are just coming up were sprayed tonight with deer repellent. The young arugula and spinach plantings look like they weathered the storm pretty well, so in a few weeks we will probably be able to get them to you. 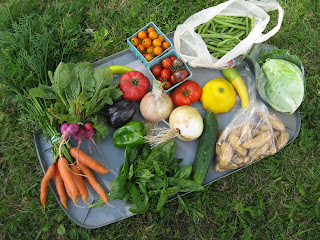 I didn't get a picture of this week's share, which disappoints me greatly because I was very excited about the fennel, but above is a pic of the previous week's share. If you used your fennel (or lemon basil, or any of the share items) in an interesting way you'd like to share with us and the other CSA members, please do use the comments button for this blog post! We always love to hear from our members, so you're welcome to comment here or call or email if you have any questions or concerns regarding the share.
Posted by Solstice Hill Farm at 10:50 PM No comments:

Hi everyone, snap-happy Kimberly here again, but ashamed to say I forgot my camera for last week's distribution so I have no picture of last Tuesday's bountiful share (which included potatoes, cucumbers, zucchini/summer squash, onions, cherry tomatoes, slicing tomatoes, cilantro, lemon basil, chard, lettuce, bell and hot peppers, and lots of extras from Saturday's market). We always would love to hear how you used your share, but I'm especially interested how you used the lemon basil, and whether you liked it or not.

This past couple of weeks we've done some final fall plantings, of broccoli and storage cabbage as well as arugula and spinach, plus the ongoing staggered lettuce plantings to keep you all in cut lettuce for as long as possible. There hasn't been quite as much rain as we would like for planting, so we've walked a delicate balance of irrigating the new plantings while keeping the tomatoes from getting too much irrigation (the ripe ones tend to split if they get too much water).

We also worked on some season extension techniques: the tomatoes in the greenhouse were strung and clipped--soon we'll have to start closing the greenhouse at night to keep it properly warm--and we harvested a bunch of storage onions (as opposed to the green onions you've been getting the past few weeks) and put them out to dry. Some are in the greenhouse on pallets, and some are in the garage on appropriate surfaces we whipped up, but both have fans blowing on them; air circulation is important to keep them from molding while drying. 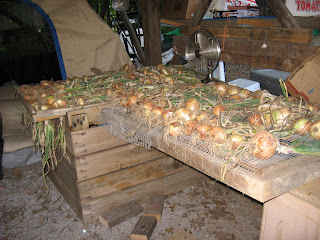 Sadly, one of the chicks died, but the other is getting special attention and is living in the house with a heat lamp in his little "room". In honor of it being a "free bird" it has been dubbed Lynyrd Skynrd. Little Lynyrd needs as much socialization as possible and so sometimes joins us for meals. S/he can't live with the adult birds yet as they would peck at her/him. 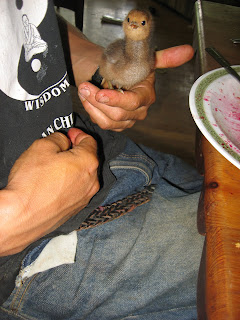 On a personal note, I finally spent a Barnes & Noble gift certificate I had received from a coworker as a going away present, and one of the books I bought was "You Can Farm" by Joel Salatin, with the intent of getting some more inspiration. Maybe you have heard of Salatin, he's a farmer who has been interviewed in the movie Food, Inc., and is featured in Michael Pollan's book "The Omnivore's Dilemma", both of which I highly recommend. I'd also like to recommend another Salatin book to you: Holy Cows and Hog Heaven: The Food Buyer's Guide to Farm Friendly Food. If you have any favorite food/farm books or videos you'd like to recommend, please use the comments button for this post!
Posted by Solstice Hill Farm at 9:57 PM No comments:

Hi everyone, Kimberly here. It was great to see everyone who came to distribution today, and I hope everyone is enjoying the procedural change we made (where you pick out your own vegetables from the bins rather than having us choose for you)! If you have any comments, pro or con, we'd love to get your feedback!

Here's a picture of this week's share, which included 11 items including the first of our tomatoes. We had harvested basil as part of last week's share in the expectation that we would be able to give you tomatoes to go with it, but ended up with not enough to give everyone a pint so we had to scrap that plan. I'm sure you'll be happy to know that we have tons of green tomatoes that should be ripening in the next few weeks, so we should be able to give you generous amounts in the near future, including some Brandywines (an heirloom tomato with an excellent taste and often large enough when sliced to cover the entire hamburger bun). 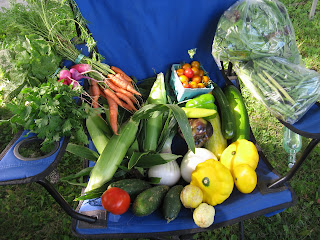 Those of you who arrived promptly today may have noticed that we were running just a wee bit behind schedule. Today Owen (Jenny's youngest child) discovered that one of our hens, who had been broody (i.e. sitting in the nestbox on eggs quite consistently,) had two chicks in the nestbox with her! While I was washing your onions, I kept hearing loud peeping, so I checked in the chicken coop and one of the chicks had fallen out and was much too small to make it back up to the nestbox, so while preparing for the CSA we were also trying to make an appropriate hutch for the hen and the youngsters to live in. 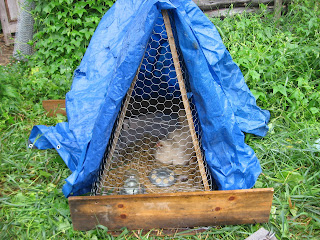 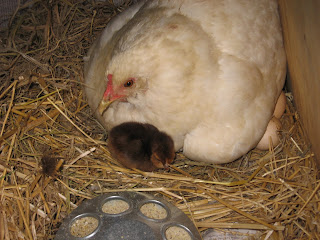 We're also happy to have made another small change in our workaday. We try to limit our use of plastics, but when it's impossible to avoid, we do try to re-use and recycle. So a couple of weeks ago we hung up a couple of ropes and found some clothespins so we can hang up the washed large plastic bags we use to transport things like bagged lettuce. 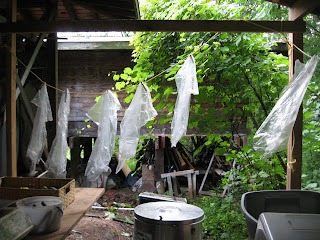 Land continues to be cleared for next year. Last week Clemens finished getting rid of the tree stumps using a stump grinder, and yesterday we were able to borrow a chisel plow from a farmer friend which will be used to pull up the roots (cultivating is near about impossible without removing them).

On a personal note, I enjoyed the Sunshine Fair and I saw my first tractor pull. We also took turns working at the Sharon Springs Against Hydrofracking booth there. Because gas drilling is an issue that worries us greatly because of its ramifiations on a basic necessity (clean water!) and agriculture, we encourage you to learn more about it and to contact your town and state government officials if you are against it.
Posted by Solstice Hill Farm at 8:45 PM No comments: